New Delhi: A day ahead of the fifth round of talks with the government, protesting farmers hardened their stand against the Centre’s new farm laws on Friday, and announced a Bharat bandh on December 8. They threatened to intensify their agitation and block more roads leading to the national capital if the government failed to accept their demand for repealing the three farm laws.

As farmer leaders were busy holding meetings during the day to decide the future course of action, a team of doctors from Punjab reached the Singhu border and examined the health agitating farmers. Doctors expressed apprehension that coronavirus could spread quickly among the protesters. Medicines were also provided to protesting farmers, who were not feeling well, at the Ghazipur border.

Amid ongoing farmers’ protests, apprehension expressed by the DNA report on November 30, showing pictures of a tractor on the Singhu border imprinted with ‘Khalistan Zindabad’ slogan and a picture of AK-47 rifle, about the entry of Khalistan supporters in this movement. The report also showed you Khalistan supporters stating that what happened with former Prime Minister Indira Gandhi would also happen with Prime Minister Narendra Modi. 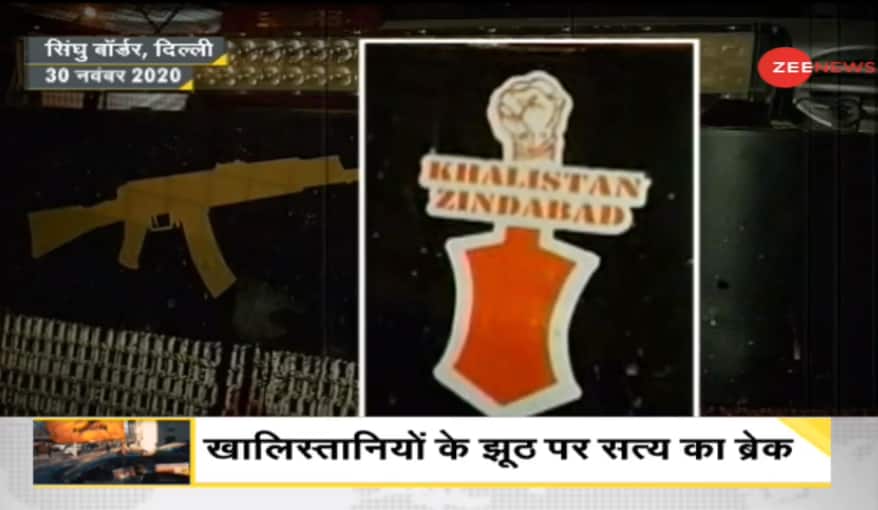 At that time, it was felt that Khalistanis have made their entry in this movement, but their poisonous agenda would fail to work. Within 15 hours of showing that piece of news, rallies were organised in New York in support of the agitating farmers of India, and Khalistani posters were waved. The posters and placards had pictures of Indira Gandhi and Prime Minister Narendra Modi with messages that Indira Gandhi messed up in 1984 and she left. It is just a matter of time, Modi will also understand.

Notably, Indira Gandhi was assassinated in 1984 by her own security personnel. Through these posters, Prime Minister Modi was also threatened. The language used by Khalistan supporters in Delhi on the 30th of November was replicated in their posters in New York. The messages written on a tractor at a protest site in Delhi took merely 15 hours to reach New York, where rallies took place on December 1.

On the 30th of November, Canadian Prime Minister Justin Trudeau made a remark about the farmers’ protest against agriculture laws in India, while participating in a virtual video interaction organised by Canadian MP Bardish Chagger to mark the 551st birth anniversary of Guru Nanak, the founder of the Sikh religion.

Justin Trudeau, who has a soft corner for Khalistanis, had said, “I know that’s a reality for many of you. Let me remind you, Canada will always be there to defend the right to peaceful protest. We believe in the importance of dialogue and that’s why we’ve reached out through multiple means directly to the Indian authorities to highlight our concerns.”

On Thursday, a rally was also held in Vancouver, Canada where the Indian government was opposed. Not only this, Khalistan flags were waved and slogans were also raised in support of Khalistan.

The chronology of Khalistan’s entry into this movement reinforces our claims that anti-national forces are trying to hijack this agitation, as they want to capitalise on anti-India sentiments not only in the country but also abroad. The country needs to remain cautious against such forces.

DNA Exclusive: Beware! your habit of posting selfies on social media may land you in trouble | India News

In a major blow to the farmers’ protests, going on in the outskirts of the national capital for nearly two